All Glory To Sri Sri Guru and Gauranga 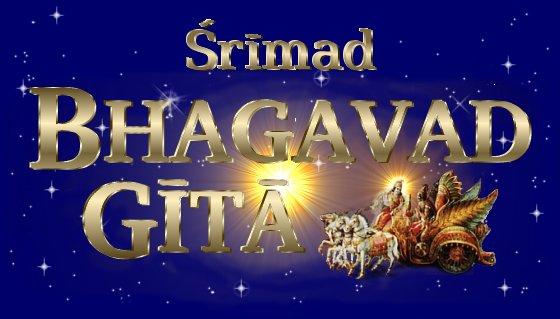 Namaste! Welcome to the Bhagavad- Gita online. We are happy you have arrived and it will be our pleasure to serve you. Here you will be presented transcendental knowledge of the most profound spiritual nature as revealed in the Bhagavad- Gita. It is the divine discourse spoken by the Supreme Lord Krishna Himself and is the most popular and well known of all the sacred scriptures from ancient India. Always being revered as a true source of spiritual knowledge it reveals the purpose and goal of human existence. In conjunction to this we will be presenting precise Vedic verification of the Supreme Lord Krishna's divine incarnations as evidence confirming His supreme position. In Bhagavad- Gita, chapter 10, verse 20, the Supreme Lord reveals that He manifests as the immortal soul within each and every living entity. No where else within any other religious scripture is this information available. Our purpose is to make the eternal knowledge of Bhagavad- Gita freely available to everyone all over the Earth.

The Bhagavad- Gita is considered by eastern and western scholars alike to be among the greatest spiritual books the world has ever known. In a very clear and wonderful way the Supreme Lord Krishna describes the science of self-realization and the exact process by which a human being can establish their eternal relationship with God. In terms of pure, spiritual knowledge the Bhagavad- Gita is incomparable. Its intrinsic beauty is that its knowledge applies to all human beings and does not postulate any sectarian idealogy or secular view. It is appproachable from the sanctified realms of all religions and is glorified as the epitome of all spiritual teachings. This is because proficiency in the Bhagavad- Gita reveals the eternal principles which are fundamental and essential for spiritual life from all perspectives and allows one to perfectly understand the esoteric truths hidden within all religious scriptures. Many great thinkers from our times such as Albert Einstein, Mahatma Gandhi and Albert Schweizer as well as Madhvacarya, Sankara and Ramanuja from bygone ages have all contemplated and deliberarted upon its timeless message. The primary purpose of the Bhagavad- Gita is to illuminate for all of humanity the realization of the true nature of divinity; for the highest spiritual conception and the greatest material perfection is to attain love of God!

Now for the first time Vedic verification of the Supreme Lord Krishna divine incarnations are revealed all together according to Vedic scriptures. Manifesting Himself in the forms of His varieagated incarnations, the Supreme Lord appears in the material worlds millenium after millenium to reestablish the principles of righteousness as confirmed in Bhagavad-Gita, chapter four, verse eight. The question may arise from those followers of the worlds religions of Buddhism, Christianity, Hebrewism, Hinduism and Islam as well as those who have studied Lemurian, Atlantean, Sumerian, Mayan and Egyptian schools of thought; why is it that Krishna is positively the Supreme Lord of all? This illustrated compilation of the Supreme Lord Krishna's divine incarnations combined with sincere, diligent study of the Bhagavad- Gita will perfectly answer all spiritual questions as well as illuminate all spiritual directions.

.
Treatises by the Acaryas

Extraordinary Personalities Reflect On The Bhagavad-Gita

If you like to be informed about changes, updates and improvements send us an email to [email protected].